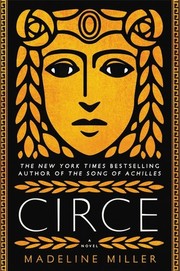 Circe is a 2018 novel by American writer Madeline Miller. Set during the Greek Heroic Age, it is an adaptation of various Greek myths, most notably the Odyssey, as told from the perspective of the witch Circe. The novel explores Circe's origin story and narrates Circe's encounters with mythological figures such as Hermes, the Minotaur, Jason, and Medea, and ultimately her romance with Odysseus and her son by him, Telegonus.